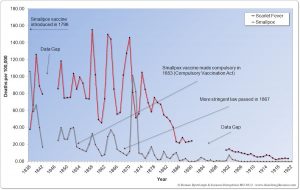 Historically, smallpox and polio were considered undeniable proof that vaccines worked, but were we told the truth?

From the graph above, the data shows:

So is there another explanation for why these diseases disappeared?  The history of smallpox vaccination policy has been driven by ongoing fraud, force and folly.

Edward Jenner (1749-1823) is credited as the founding father of smallpox vaccination. He documented 23 cases where people who presented with what was diagnosed as cow pox, were later inoculated with smallpox, and appeared not to get the disease.

There was no comparative control group who didn’t get the inoculation.

Jenner’s claims were based on slender experimental evidence and some of the information presented was incomplete and misleading.

Lifelong immunity from smallpox was initially claimed. However, as smallpox occurred prominently among the vaccinated, re-vaccination was then implemented after seven years. By 1914, this “immunity” period was shortened to 6-12 months! 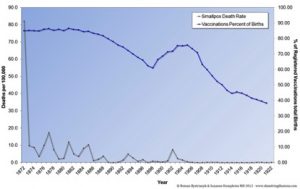 The greatest smallpox epidemic in Leicester (1870- 1874),  coincided exactly with the period of greatest vaccination.  Smallpox deaths declined thereafter even as vaccination rates plummeted.

On 23rd March 1885, what became known as the Great Demonstration against compulsory vaccination took place in Leicester, UK. The march of 100,000 people stretched for two miles.

That same year, the Leicester government was replaced with a new government opposing compulsory Vaccination. By 1887 vaccination coverage rate dropped to 10%.

“After this evidence that smallpox vaccination didn’t work, the people of Leicester in the English midlands refused to have the vaccine any more. When the next smallpox epidemic struck in the early 1890s the people of Leicester relied upon good sanitation and a system of quarantine. There was only one death from smallpox in Leicester during that epidemic. In contrast the citizens of other towns (who had been vaccinated) died in vast numbers…Doctors and drug companies may not like it but the truth is that surveillance, quarantine and better living conditions got rid of smallpox – not the smallpox vaccine.” – Dr. Vernon Coleman, MB

So how was the fraud maintained? A person who was vaccinated and then came down with the disease that they were supposedly “protected” against, was simply recorded under another name. From 1904 to 1934 in England and Wales, 3,112 died of chicken pox and 579 died of smallpox according to the health records. In other words, people who have been vaccinated for smallpox and had later come down with the disease were classified in the health records as having chickenpox.

Using this strategy, the WHO started its campaign to eradicate smallpox in 1958, in the same year they named an infectious disease monkeypox. According to the WHO, the disease was clinically indistinguishable from smallpox. This correlates well with the findings of George Bernard Shaw:

Monkeypox is still an active disease today. By claiming a monkey could be a vector they hid the fact that the smallpox could be the cause of the infection. This was the basic framework for the Global Smallpox Eradication Campaign. Over the past 20 years ten Central and West African countries have reported that monkeypox cases have risen exponentially.

The last reported case  of death from smallpox, was the medical photographer,  Janet Parker, in 1978. Conspiracy surrounds the case. Her father died of a heart attack in quarantine. Her mother supposedly contracted smallpox after being vaccinated and the head of the lab, were Janet had been employed, committed suicide by cutting his own throat. As a result of this case, the WHO instructed labs to destroy their smallpox stock.  It was suggested that the existence of these labs posed a threat to the success of the Global Smallpox Eradication Campaign.

The WHO has subsequently used the myth, that smallpox had been eradicated, to give credentials to the whole vaccine program worldwide. Most people now believe that vaccines have saved us from the most dreaded infectious diseases. They have no idea that the real decline in infectious disease deaths was due almost entirely to improved sanitation, clean drinking water, nutrition and higher living standards. In the UK in 1840, as doctors and citizens realized that smallpox vaccination was not what it was promised to be, vaccine refusals increased. Governments passed various laws to force people to be vaccinated.

The United Kingdom Vaccination Act 1853 made it compulsory for all children born after 1 August 1853 to be vaccinated against smallpox during their first 3 months of life. Parents who failed to get their children vaccinated would be subject to a fine.

In Leicester the number of prosecutions for non-vaccination grew from two in 1869 to 3,000 in 1884.  Fines were fiercely enforced. Police collecting a fine from one Arthur Ward threatened his pregnant wife with prison. The argument sent her into premature labor and the child was stillborn.

The compulsory vaccination law was repealed in 1907. By 1919, England and Wales had become one of the least vaccinated countries and had only 28 deaths from smallpox out of a population of 37.8 million people.

According to official figures of the Registrar General of England, 109 children under five years in England and Wales died of smallpox between 1910 and 1933. In that same period 270 died from vaccination.

Massachusetts, USA, in 1855, took the most advanced stand ever taken by any of the states and enacted a law which required parents or guardians to cause the vaccination of all children before they were two years old, and forbade the admission of all children to the public schools of any child who had not been duly vaccinated.  Parents who did not vaccinate their children by age 2 faced a fine of $5 yearly (about $156 in today’s dollars).

New Jersey, 1906, 30,000 pupils and teachers were forced to submit to vaccination. Twenty teachers and hundreds of pupils who refused, were suspended. Many of those vaccinated became seriously ill.

To maintain the prestige of the medical profession and themselves, the government put the full force of their powers to legislate compulsory vaccination.  They used public funds and the power of the police to enforce inoculations on the unwilling and defenseless.

“Smallpox vaccination has always correlated positively to epidemics in the countries that collected data in the vain hope of proving the vaccine’s worth.”  Dissolving Illusions” by Suzanne Humphries, MD and Roman Bystrianyk

In Leicester, UK, reports of deaths and outbreaks created doubts about the effectiveness and safety of vaccines. There was a growing list of complications attributed to vaccination. The 1871-72 smallpox epidemic provided a vivid example to the townspeople, as some 3,000 cases occurred and of these 358 died. Some of those dead had been vaccinated according to the law. 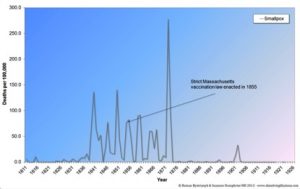 Smallpox Statistics We Were Meant to Forget:

From the beginning of the 20th century in England we find that there were similar numbers of vaccine-induced deaths to smallpox deaths, except in the case of children under 5 yrs of age, where the vaccine proved much riskier than smallpox itself.

1911-13: Comparison of smallpox and vaccination deaths.

Smallpox vaccines were proving themselves to be neither safe nor effective. Epidemics were increasing in severity in the wake of vaccination. Correspondingly, they were decreasing as vaccination rates declined.  Improved living conditions were having a better effect and had all but wiped smallpox out.

With exquisite irony, a 1972 smallpox outbreak in Yugoslavia was halted through use of the Leicester Method. This involved rapid quarantining of cases and contacts, as well as, cleaning of the houses.  – while the authorities vaccinated 18 million citizens in full knowledge of its ineffectiveness. Vaccination had to be implemented if the story of ‘vaccine success’ was to be upheld.

The folly was always, the belief that you could safely inject some infective agent, of highly dubious toxicity, into the body of a healthy individual, or a really seriously unhealthy individual. This was to prevent, or mitigate the severity of, an illness that was already reportedly mild in most developed nations, or in many countries non-existent.

The risk of contracting the illness had to be outweighed against the risk of the vaccine. Taking the vaccine into your system, exposed you to all the potential side effects, including serious injury and death.

The only way this scenario could ever be accepted was to deny alternative methods and alternative policies,  censor any knowledge of adverse events, and ‘discover’ an illness almost identical, and name it ‘monkeypox’.

The legacy of the smallpox story lives on in our understanding and acceptance of vaccines today. “Vaccines save lives and adverse events are rare” still frames the belief system driving vaccine compliance.

Vaccination programs and anti­biotics have mistakenly been given all the credit for  declines in killer diseases such as smallpox, cholera, typhoid, tuberculosis, dysentery, etc. Most or all of the credit belongs to better hygiene, sanitation, hous­ing, and greater resistance to disease thanks to improved economic conditions and better nutrition.

In fact, many keen observers commented that it may have been because of how OBVIOUS it had become that the smallpox vaccines were spreading smallpox, that the WHO (World Health Organization)  was motivated to cease the vaccination program but credit it for the eradication!

Has smallpox been eradicated? Was it eradicated from laboratories? What does Bill Gates say about the global future of  smallpox? 6 November, 2021 – Bill Gates warns terrorists will try and use smallpox as a biological weapon as he bids for billions in funding to prevent future pandemics